How to get obscure unicode scripts to display

Not sure if this is the best place to post, but I thought I'd try since it relates to linguistics corpora and being able to read texts.

), but I can't see others such as the Bhaiksuki characters, which look like this in Wikipedia:

. Wondering how I get these to show up, if there is some universal font that allows it to work or something. It's not just the Bhaiksuki script, there are many unicode characters that don't show up for me, though most of the standard ones do.

Wondering if I need to install each of these fonts individually or if I can install one font to get everything. This is what the Bhaiksuki and other more obscure unicode blocks look like for me on Wikipedia: 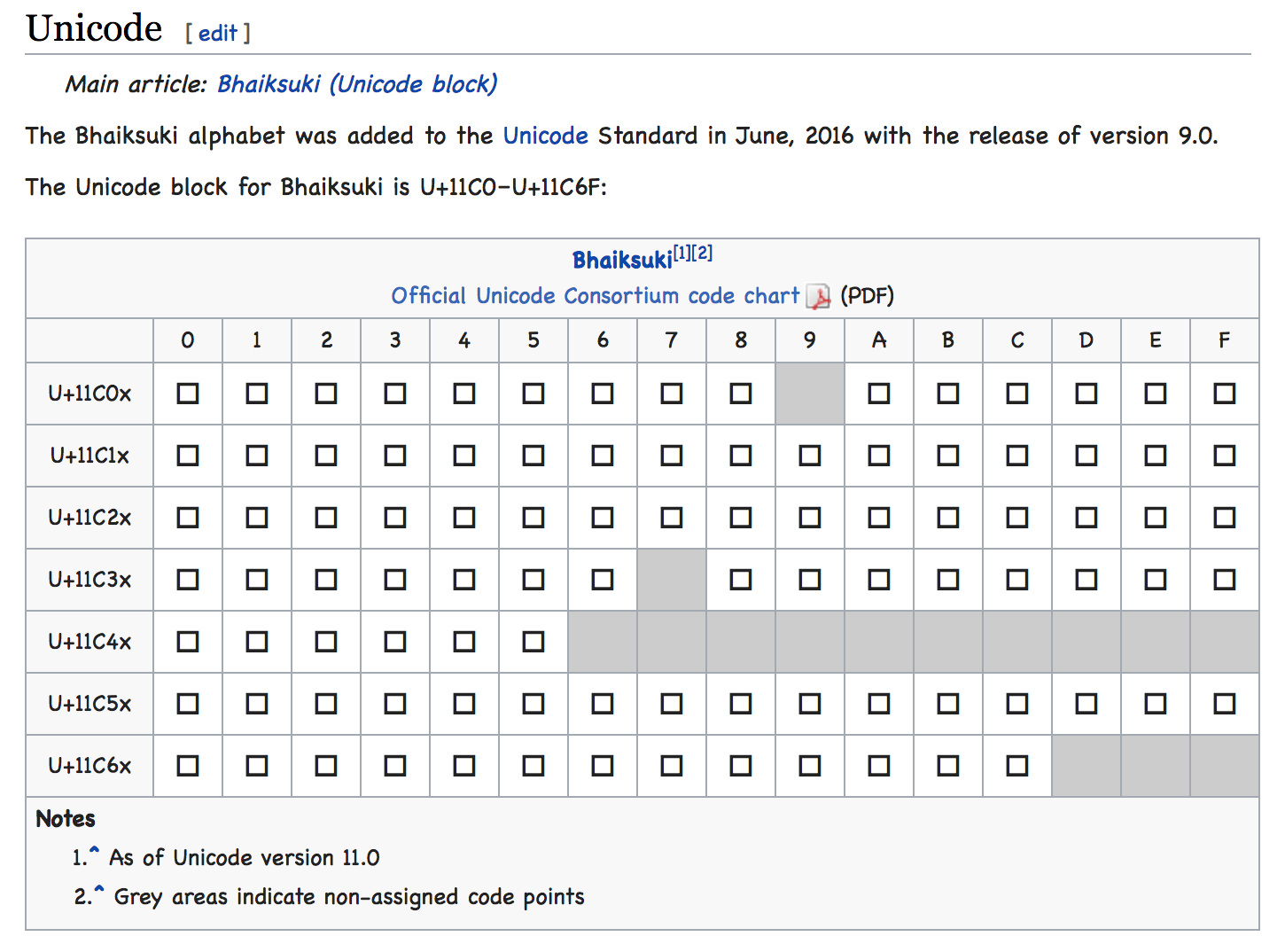 I was able to get all of the major scripts to show up with Google Noto font, but not the more obscure ones.

According to the repo, Noto has added Bhaiksuki support in November 2018. So updating your Noto fonts should fix that particular issue.

If you're on Debian, using this package should keep your Noto fonts up to date automatically, including any new ones they add (like Bhaiksuki). This package is even more complete, though it takes more disk space (because it includes the CJK planes).

Other than waiting for Google to improve Noto coverage, though, there's not much you can do I'm afraid. In pre-Noto times the only solution was to seek out a specialized font for each script you wanted to use.

When the obscure script is already included in Unicode, using Unicode codepoints and downloading appropriate fonts is the way to go. Any recent operating system comes with a plethora of fonts preinstalled, just keep your system up-to-date and you will rarely have troubles with missing fonts.

Not the answer you're looking for? Browse other questions tagged discussion .

11
Should we allow highly open-ended questions like “do any languages have feature X”?
2
Guideline asking users NOT to to cite Wikipedia as a source?
2
A new addition to the FAQ: Guidelines on how to write a post properly
5
Let's create a regular chat event!
4
Organizing our Linguistics Blog
0
Why can't social sciences topics like linguistics have subjective questions that spur discussion?
11
Cleaning up the tags
6
Any objections to my formal addition of language identification to our list of off-topic questions?
2
How to deal with assumptions taken from Wikipedia?