I've just asked a question about regarding the language variety spoken in Serbia, Croatia, and other areas of former Yugoslavia. I understand the naming of the language is a contentious political topis, with a choice between possible names (Serbo-Croat, Serbo Croatian, BSC etc.) The tag I created for the question was Serbo-Croat. Is this the most common and acceptable term for the language(s) - and is it suitable as a tag for this site? Obviously it would be tedious to have to tag one question with several synonyms with various alternatives.

UPDATED WITH MORE STANDARDS We don't have to solve this, the international community have multiple standards for this. I think that bosnian-croatian-serbian although long may be an acceptable choice.

The individual languages within this macrolanguage are:

hbs is unfortunately opaque and confusing, and suffers from being an abbreviation. Additionally it is not an English-language abbreviation, and our site uses the English language.

The European Union has not officially taken on the issue, as only Croatia has been invited into the EU from the concerned area. There was some controversy about what to call the language. For now the EU will recognize Croatian as an official language, and expects to have to revisit the issue. So, no real decisive help there.

This macrolanguage is not an official language of the UN, and the UN does not support language other than its official ones. Again, no help.

The War Crimes Tribunal (ICTY) in the Hague calls this macrolanguage "Bosanski, Hrvatski ili Srpski" - "Bosnian/Croatian/Serbian" in English or BCS.

Given that of all institutions the ICTY may have been the most concerned with neutrality and lack of offense, and given the true gravity of the ICTY's mandate, I suggest that if "Bosnian/Croatian/Serbian" worked for them, it should work for us.

I propose that we follow Wikipedia and use serbo-croatian, unless some other consensual term exists among linguistics. But I don't think there is any such term; I think linguists normally classify the language as Serbo-Croatian: 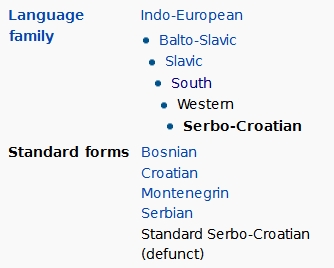 On the one hand, offending people needlessly is not what we want. On the other, there will always be people who are offended at any ethnic, religious, etc. term, and we should not let our use of common words be dictated by the offended. For all we know, someone else might be offended if we stopped using Serbo-Croatian, because that would disrespect the cultural history of the glorious region, or whatever. Secondly, we need a clear term here that everybody can understand; so the offence given, if any, is not at all needless. Mark's suggestion, while admirably neutral, is not intelligible to most people.

I don't think we should make our own decision in this matter and come up with extensive argumentation; this has all been done on Wikipedia, and it's not a pretty sight (don't ever click on the Talk page). They have come to the conclusion that Serbo-Croatian is preferable, and I think we should follow suit, failing a better alternative.

Not the answer you're looking for? Browse other questions tagged discussion status-completed tags tag-synonyms language-families .

Welcome!
This site is for discussion about Linguistics Stack Exchange. You must have an account there to participate.
Help

4
Should we merge the "historical linguistics" and "language change" tags?
2
About the question "Is it common to use the minor third for calling someone in Italian?" and its closure
1
How do we create tags for words with multiple connotations?
4
Should the questions of identifying language be on-topic?
1
What is the meaning of "..." in modern English?
1
Should we include "Montenegrin" in the "bosnian-serbian-croatian" tag?
5
What is the difference between Computational Linguistics and Natural Language Processing?
11
Cleaning up the tags
3
Where can I ask for a translation?