How do numbers differ from numerals?

Tags numbers and numerals appear to cover exactly the same ground: names of numbers, which Wikipedia describes in "Numeral (linguistics)". Both are distinct from grammatical-number, which is about inflection of nouns, verbs, and adjectives for a generally small set of numbers. Is there a difference between numbers and numerals, or would it be a good idea to make them synonyms?

• "Numerals" are the written forms of those ideas, and

• "Digits" are the individual characters used to display those written forms.

According to the Math Is Fun page, "Numbers, Numerals, and Digits", the distinctions are as follows: 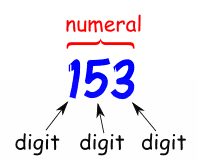 Per @curiousdannii's request, here are some more sources:

As such, this should not be treated as purely objective fact. However, not only are the given definitions supported by the other sources I've provided, but the author includes the rationale behind their defining the terms that way. Take it as you will.

In my mind, numerals are only numbers as written in digits (0, 1, 2 etc), whereas numbers would refer to spoken numbers or numbers written in words (one etc). Having distinct tags seems okay to me. (Note I haven't checked if they are used in this way.)

Not the answer you're looking for? Browse other questions tagged discussion tags tag-synonyms .

3
Change the question or ask a near duplicate?
5
How should we name language family tags
5
What is the difference between Computational Linguistics and Natural Language Processing?
6
What is the meaning of "Language-specific grammar and usage questions are off-topic unless primarily concerned with linguistics rather than usage"
5
Question from Language Learning: How can we best complement this site?
11
Cleaning up the tags
2
How to deal with assumptions taken from Wikipedia?
4
What should the site-specific close reasons be?